Fire Hazard of Every Building in California: An Interactive Map

Recent wildfires in Southern California, most notably the Saddleridge Fire in the San Fernando Valley and the Sandalwood Fire in Riverside County, serve as reminders that many communities in the state are vulnerable to wildfire hazards.  While all Californians should be adequately prepared for disasters such as earthquakes and wildfires, some communities are more vulnerable to wildfires than others.

UCLA Geospatial developed the following interactive map showing all buildings in California, as classified by the CAL FIRE Fire Hazard Severity Zone to which each building belongs.

Search for your address, the name of your community, or the address of any building in California -- or just browse the map to explore fire hazard statewide.  Please note that by using the map below, you agree that you are using the map exclusively for educational and/or informational purposes.

You may search for any address or location within the state of California using the search box at the top right corner of the map.  Hovering over any building will trigger a pop-up information box that will display the fire hazard severity zone within which the building falls, as well as the type of firefighting agency that is responsible for providing primary firefighting in the area (Local, State, or Federal.)

About the Data and the Fire Hazard Classifications

The fire hazard classifications visible on this map are derived from merging CAL FIRE's adopted fire hazard severity zones within its SRA with all of the recommended fire hazard zones that CAL FIRE presented to local and federal authorities.

We would also like to emphasize that in developing this map, UCLA Geospatial is neither determining nor offering any opinion on the actual fire hazard to which any property or structure is subject, and UCLA Geospatial has no control over determining the fire hazard zones presented in this map -- this is the responsibility of CAL FIRE and other responsible agencies. This map simply presents public data from CAL FIRE in overlay with a dataset that shows approximate building footprints.  This map is to be used for educational and informational purposes only and we specifically advise against using this map for any other purposes.  UCLA Geospatial is not able to respond to individual requests for reclassification of fire hazard of properties, structures, or areas since the fire hazard severity zones used to create this map originated from CAL FIRE.

About the GIS Methods and Web Mapping Technologies

This map was developed entirely using free and open source software, including QGIS, Mapbox GL, Tileserver GL, and a Web server running a variant of Linux.

QGIS, a desktop GIS software platform, was used to merge CAL FIRE's SRA fire hazard zones with recommended local responsibility area (LRA) fire hazard zone classifications for each county individually.  We also used QGIS to perform basic processing of Microsoft's building footprint data prior to the execution of a spatial join which was used to identify the primary fire hazard zone to which every building in California belongs.

Mapbox GL JS is a Web mapping library that allows for the display of complex spatial data directly within Web browsers using hardware-accelerated graphics rendering.  Mapbox GL is used to render both the building footprint data as well as the basemap data.  Mapbox GL JS also is used to access Mapbox's geocoding service, which allows users to search for addresses and place names.

GDAL/OGR was used to generate a vector MBTiles file of California building footprints, allowing for the massive dataset to be rendered quickly by Mapbox GL JS at any geographic scale.

Are you looking to get started with a career involving GIS, geospatial technology, or cartography?

UCLA Geospatial, in partnership with UCLA Extension, offers a fully online certificate program in geographic information systems (GIS) and technology.  This fully online certificate program provides a comprehensive introduction to state-of-the-art methods and techniques within the field of geographic information systems (GIS) and geospatial technology. All courses are designed to accommodate the schedules of working professionals. and no prior GIS experience is required or assumed. Participants who complete the program can expect to be sufficiently prepared for an entry-level job in GIS and/or related geospatial industries. 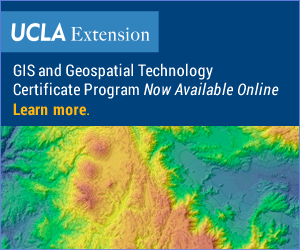 The UCLA Online GIS Certificate Program has proven to be a great investment for my personal and professional development. I have not only learned the fundamentals of thinking geospatially, but have been able to create creative maps that are works of art disguised as homework assignments... The…

This intensive program has helped me in my day-to-day tasks as a GIS analyst, such as the capacity to conduct the GIS-related tasks and analysis, allowing me to gain a practical experience and skills of geospatial technology know-how. What great course designs and interactions between instructor…

END_OF_DOCUMENT_TOKEN_TO_BE_REPLACED

Copyright © 2020, Regents of the University of California.
All rights reserved.